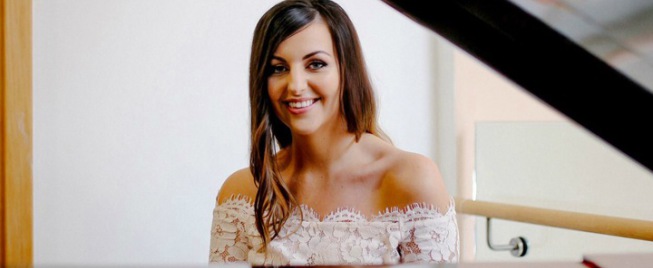 Award Winning Mezzo Soprano, Danielle Thomas performs throughout the UK and internationally and is known as 'The Voice of Liverpool' and also the Cities, 'Singer in Residence'.

Danielle began training at the very young age of 9 with a local teacher, Mr Gerald Hunt before attending the Junior School of the Royal Northern College of Music studying Voice and Piano.

At the age of 11, she made her television debut on BBC's Songs of Praise where she sang Rick Wakeman's arrangement of 'Morning has Broken' accompanied by Rick himself, after being scouted by a producer from the BBC.

At the age of 17, Danielle made her debut at the Liverpool Philharmonic Hall performing with the RLPO in the renowned 'Spirit of Christmas' Concerts, under the direction of Professor Ian Tracey.

Danielle is very proud to perform at the Civic Events for the City which have included past performances for Lord Heseltine, our Armed Forces, Ken Dodd and the late Everton Legend, Dave Hickson to name a few. Other events have included, performing for the final visit for HMS Liverpool, the final visit for HMS Illustrious, the Historic 3 Queens event which saw the three Cunard Ships on the River Mersey at one time, the Cunard Building Centenary Concert, supporting Russell Watson at the International Mersey River Festival amongst others.

In 2013, Danielle was honoured to perform with the Band of Her Majesty's Royal Marines at the Philharmonic Hall, Liverpool for the  commemoration Concert for the 70th Anniversary of the Battle of the Atlantic. This also included a service held at Liverpool Cathedral which was broadcast live on BBC One with HRH Princess Royal in attendance.

In 2015, Danielle was announced as the first Ambassador for North West Cancer Research after wanting to help a charity close to her heart after losing her Grandad to colorectal cancer a few years previous.

2016 was a significant Year for Liverpool as the City held a vigil for the 96 Hillsborough Victims after the families of the 96 finally got the Justice they deserved. The City came together outside St George's Hall and it was a moment that will go down in history as the whole of Liverpool sang 'you'll never walk alone'. The vigil was broadcast live all over the world including Sky News, ITV, BBC One. Danielle sang a 'Stirring rendition of Abide with me' which can be seen here:  https://youtu.be/K4WcNUuoTdw

Danielle is in great demand as a soloist locally and internationally for Concerts and Corporate Events.

Performances over the years have seen her travel to New York, Japan, Italy, France, Barbados and also the Middle East.

Most recently, Danielle was privileged to be the guest soloist for the Band of Her Majesty's Royal Marines, Portsmouth in their Concerts at Cadogan Hall, Philharmonic Hall and Bridgewater Hall.